If you’re a badminton player, you probably realise that there are so many options when deciding what’s the right or best shot to play.

Did you know you can take a mathematical approach to shot selection? Yes, we’re talking about mathematics. I get it, I’m Asian, but this isn’t about my love for numbers and probability but it’s about how to get the most of your shot selection and considering probabilities is one of many ways to approach it.

Don’t bring out your calculator just yet because I’m not asking you to do calculus, I’m asking you to take a simple approach with the shot that you’re about to play and how to anticipate your opponents shots too. How are you currently determining whether you play a clear, smash or drop when someone clears to you? And where do you intend to hit that shot as well?

When you’ve played enough badminton or played with the same people repeatedly, you’ll probably have a fairly good idea of where the next potential shot will be. This gives you the opportunity to do some forward planning. Let’s look at probabilities for determining where your opponent is going to hit in a singles example. Picture this:

This may be different at a professional or higher level but I’m sure you get the gist of it. When you play a shot like that, you can anticipate that the shot they play will likely be at the front of the court or potentially into your back-right position again.

Let me explain why. Playing a cross-court clear requires a lot of power, which at a social level and even at some of the competitive levels can be very hard to execute (especially if your opponent plays a backhand off that clear). If you place your focus on the other three likely areas that the shuttle will land, then you’re more likely to reach there early. As you probably know, the benefits of being at the shuttle early is paramount.

Let’s move on to deciding your own shots. I remember someone I was playing with telling me this in the last couple of years. It’s very likely that somebody was my business partner Jeff. He asked, “what’s the probability of you winning the point with that shot?”. To be honest, I can’t remember what the shot was at the time but that question and the insight from it has stuck with me since then and I always use it to reflect on court. As I said, it’s not highly mathematical, it’s a simple sense check for the shot you are about to play, or the shot that you just played (whether you win or not).

Let’s consider the following example continuing from our previous example: My opponent reached my clear and played a dropshot that I lunged and managed to reach at full stretch. The shot I chose to play was a net roll. As my opponent was at the back of the court when playing the dropshot, they needed to come into the net and play their next shot. I was fatigued by the challenging dropshot so much so that I was sluggish to return to the centre of the court and my opponent played a lift, which I struggled to get into position for. Being completely out of position, I chose to play a smash. What’s the probability of me winning the point with that shot? 15.68% give or take. You can have a fairly good idea without any fancy calculations as to whether you’re likely to produce a winner, a useful shot or one that’s going to damage you more than your opponent.

The next time you lose the point, have a think through your last few shots. Consider the following questions depending on when in the series of play you are reflecting on:

These simple yet powerful questions that I ask myself all the time on the badminton court has helped me make smarter choices and I hope they serve you the same way.

Wow, thanks for sharing Frank! 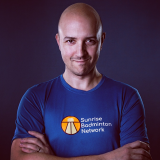 Finally, someone else`s talking about maths in badminton! Loved to read that one guys! Here`s an enigma for you here: https://sunrisebadminton.com/2020/06/13/guess-the-badminton-player/

You may have seen some of his more popular videos, "How to Play Backhands like Taufik Hidayat" or "Perfect Badminton Low Serve Every Time”.
Read More